With over 150 years of financial experience amongst our partners, they and their dedicated support staff are here to help with all your financial concerns and opportunities. Each partner has held leadership positions not only at the local and state level, but also at the national level. They are well positioned to lead our organization for generations to come.

Additional information about individuals registered with FINRA can be found on FINRA's BrokerCheck. 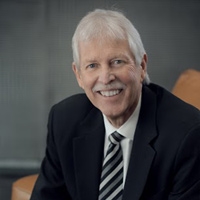 Bruce graduated from Wichita State University with a bachelor's degree in Business Administration and a minor in Economics in 1970. After a brief stint with the Coleman Company of Wichita, he entered the financial services industry with Schreck Financial Group, LLC, joining his father, Don Schreck. He specializes in working with individuals and businesses, helping them with accumulation and preservation of wealth.

He participates in the industry groups as a member of the National Association of Insurance and Financial Advisors. He has been a member of the Million Dollar Round Table for over 30 years and has qualified for the Court of the Table five times. He has always been interested in expanding his skills and knowledge and earned his Chartered Life Underwriter (CLU) in 1980 and Chartered Financial Consultant (ChFC) designation in 1984.

His contributions to the community include serving on the National Advisory Council of Wichita State University Foundation. He is on the Executive Advisor’s Board at the Ulrich Museum at WSU and a past president of SASO (Student Athletic Scholarship Organization). He is an avid golfer and enjoys traveling.

He has been married to his wife, Linda, since 1982. They reside in Wichita and have three boys: Jeff, Todd, and Chris.

Winning the National Quality Award and National Sales Achievement Award are not indicative of future performance or positive experience with you. 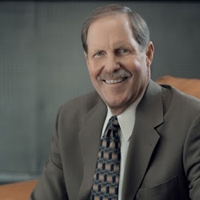 A highly active participant in the industry, Brian has served as an instructor for the Life Underwriter Training Council for 15 years and is a member of the Wichita Estate Planning Council. He is also the former president of both the Wichita Chapter of the Society of Financial Service Professionals and the Penn Mutual Life Insurance Company’s National Agents Association.

Brian earned his CLU (Chartered Life Underwriter) designation in 1980 and his ChFC (Chartered Financial Consultant) in 1985, has been a life and qualifying member of the Million Dollar Round Table for over 30 years and has qualified for the Court of the Table four times.

Brian’s contributions to his community have included his position on the Business Advisory Board for Students in Free Enterprise (SIFE) at Wichita State University (WSU) and his position as president of the Guadalupe Clinic Foundation Board.

He has been married to his wife, Donna, since 1985. They reside in Wichita and have two children: Shawn, who joined Schreck Financial Group in 2001, and Trisha, a veterinarian in Salina. In addition to spending time with his family, he is an avid golfer who also enjoys hunting and fishing. 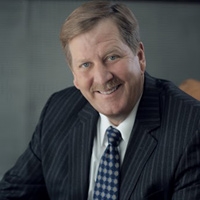 All Brad knew was that he wanted to play basketball; that was his dream. The neighbors complained they would hear the basketball bouncing and backboard pounding way after the sun went down. He played in high school at Kapaun Mt. Carmel and went on to play at West Texas State in college. At West Texas, he played alongside Maurice Cheeks who went on to play as a Philadelphia 76er. He also guarded Larry Bird, with whom we are all familiar. The first time they faced off when Larry was still an unknown, the coach said, “Schreck, we have heard this Bird is a pretty good shooter. You guard him.” He scored thirty-three points that day, much to Brad’s chagrin. The next time, a more prepared Brad held him to 12 points. A picture hangs on his office wall of he and Larry Bird wrestling on the floor for a loose ball. We are all sure Larry has that same picture on his wall. Brad followed his passion, and the summer after graduating, he went to Los Angeles where he played for the summer pro league for the Lakers. He got cut after the end of the summer.

After trying a couple other endeavors (Juicy Lucy and Chinese Chicken) Brad decided to give his father’s business a shot. That was in 1981. Over thirty years in the business, he has developed over 1500 clients and brought a son, Joshua Bolan, into the business. He is married to Sandi, and they have seven children and thirteen grandchildren. He manages to enjoy March Madness every year and is an avid supporter of Wichita State basketball. He has served on the board at Starkey, Via Christi Golf Classic, St Vincent’s Endowment Association, and Cerebral Palsy Research Foundation. He maintains the same integrity his father taught him, “Keep the clients best interest in mind, and all will prosper." 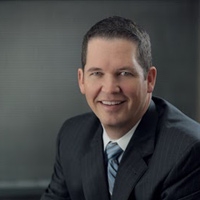 John helps his clients avoid the common and often irreversible mistakes made by those near and in retirement. Since 1998, he has worked to improve the financial condition of individuals and businesses throughout Kansas.

John has been involved in the community since his high school days, growing up in tiny Turpin, Oklahoma and then on to Liberal, Kansas. As a freshman in high school, John led an initiative which ultimately led Turpin High school to start a high school baseball program. While in college, John was very involved in community affairs and was a local spokesperson for Big Brothers, Big Sisters of Lyon County. Since then, he’s served as the chairman of the board for Clearwater’s assisted living, memory care, and nursing home facility as well as serving his church as a deacon and an elder.

From humble southwest Kansas roots, John is happily married to his wife Crystal, who grew up in Valley Center. They are the proud parents of three boys: Brock, Carter, and Will. They live the quiet life in Clearwater where they spend their time with family, playing and watching sports, volunteering at church, being with friends, and traveling.

The Court of the Table was created by the Million Dollar Round Table (MDRT).  The requirements do not evaluate the quality of services provided, the applicant’s future performance, and is granted for one year only. All members must apply every year to continue their affiliation with MDRT. 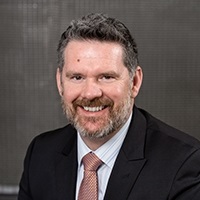 Ron specializes in helping people who are interested in having a solid foundation of retirement income, planning for the eventual distribution of their assets, and protecting their wealth. In addition to helping clients, he also enjoys mentoring, managing, and training new agents. Ron’s favorite part of his career has been watching clients enjoy financial freedom that could be achieved from implementing proper financial planning strategies.

Ron has been a member of the National Association of Insurance and Financial Advisors since 2004. He consistently achieves membership in the prestigious Million Dollar Round Table, and for several years he has been recognized as a member in MDRT’s Court of the Table. Along with John, they are the only two advisors in the Wichita area under the age of 40 to have received the MDRT’s elite Top of the Table distinction.

When not working, he enjoys watching KU basketball and other sports, spending time with his daughter Brittany, and encouraging his son Avery, who is quite a basketball player in McPherson. When he can, he likes going golfing and traveling.

The Court of the Table was created by the Million Dollar Round Table (MDRT).  The requirements do not evaluate the quality of services provided, the applicant’s future performance, and is granted for one year only. All members must apply every year to continue their affiliation with MDRT.